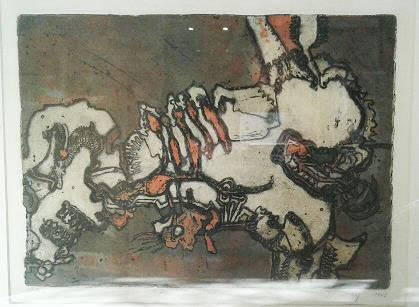 Juan Downey was born in Santiago, Chile in 1940. He studied Architecture at the Pontifical Catholic University of Chile and started to exhibit his art. In 1961, after finishing his studies, he moved to Barcelona, Madrid and Paris, where he studied engraving with S.W. Hayter at Atelier 17. During his stay in Paris he became friendly with Roberto Matta, the poet Pablo Neruda, Julio Le Parc and Nicolás Guillen, among others. In 1965 he moved to the United States to exhibit at the Organization of American States in Washington, D.C. In 1969 he moved permanently to New York where he produced most of his work and was recognized as one of the principal artists of the period.  He worked with various mediums and currently is recognized as one of the pioneers of video art. During his life he had two individual exhibitions at the Whitney Museum of American Art. He received several scholarships, including two Guggenheim Grants, a scholarship of the Center for Advanced Visual Arts at MIT, Cambridge, MA; two Rockefeller Scholarships and several National Endowments for the Arts. He taught at Hunter College and the Pratt Institute. He travelled extensively throughout the Americas and lived with the Yanomami Indians in the Amazon jungle for a year. Juan Downey died in 1993 in New York at the age of 53.